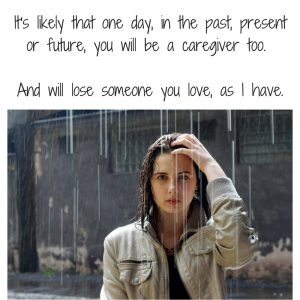 My friend, Roberta, reminded me that I have been a caregiver all my life, not just the last year. Obviously, taking care of Dave when he was diagnosed with pancreatic cancer looms largest in my mind and I learned a lot about life in that year of facing down death. The usual lifespan for someone with Stage 4 pancreatic cancer is 6 weeks to 3 months so we fought for every extra minute.

Being a caregiver involves providing emotional and/or practical support to someone, whether or not your actions change the outcome in the situation.

I remember, at 15, when my father left for a while, and 20, when my parents divorced, coming home to my mother and brothers crying on the bed, and reassuring them, “It’s going to be OK.” What a crock! I had no power to heal that heartbreak but, helpless, I still tried to offer emotional support.

Six weeks before we were married, my husband got extremely stressed and I thought it was wedding jitters. Neither of us had been married before. We just didn’t know. He was diagnosed with bipolar disorder and I chose to marry him, knowing it. We loved each other and chose each other but sometimes the journey was harder than either of us could have imagined. Because public opinion about mental illness is harsh and lacks understanding, we kept the secret for two years. The worst decision of my marriage, cutting me off from the support of friends and family. Talk about a pink elephant in the room?!

I was very close to my grandparents, especially my mother’s parents, who called me Tiggy, after Mrs. Tiggy Winkle. My grandmother, who died in her 80s had Lou Gehrig’s disease and, when she decided to stop eating, I was alone with her. She said to me, “I’m having a hard time talking. And you know how I love to talk.” My mother and grandfather had just gone up to Maine. I enforced her stated health directive with the doctors and nurses at the retirement community not to force feed her until my grandfather returned.

My grandfather, who died at 99, loved going up to Maine. I visited him often to walk and talk. At 95 and 97, my mother, aunt and me made it possible for him to go up there. I went and helped him pack clothes and pills, then off to the airport, and on to the plane, where he insisted on climbing the stairs without assistance (stubborn man). Towards the end, he worried that he was going crazy because he heard music and saw things that we didn’t. I reassured him that he was just close to the veil between life and death, but he wasn’t really comforted.

In his 40s, David, my husband, was diagnosed with diabetes, first Type 2 and then adult Type 1. His diabetes was volatile and close to uncontrollable, with blood sugar ranging from 45 to 578. Low blood sugar crashes included getting very aggressive, convulsions, eyes rolled back in his head, slurred speech and abusive language. I gained hyper sensitivity to low blood sugar crashes at night and could leap into the action of getting honey into him from a dead sleep. He was always resistant to modifying his diet to accommodate the diet which made it even harder to control. We fought about that.

And, finally, his diagnosis of Stage 4 pancreatic cancer came in October 2015. The needs of being diabetic and controlling blood sugar, and having cancer, needing to gain weight, opposed each other and were one of the big challenges we faced during his illness. Along with dealing with healthcare and insurance systems designed to frustrate instead of provide care, well-meaning doctors stymied by the same systems, money stresses and extreme physical pain, we experienced the full spectrum of emotions as we tried to squeeze every moment of sweetness out of those last days.

I have been a caregiver in the face of separation and divorce, Lou Gehrig’s disease, old age, diabetes and cancer. Wow! Until Roberta spoke up, I only considered being a cancer caregiver relevant. Yup, well qualified on this topic, LOL! 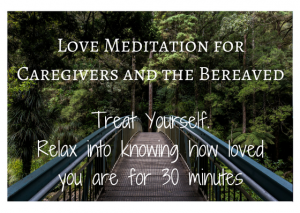